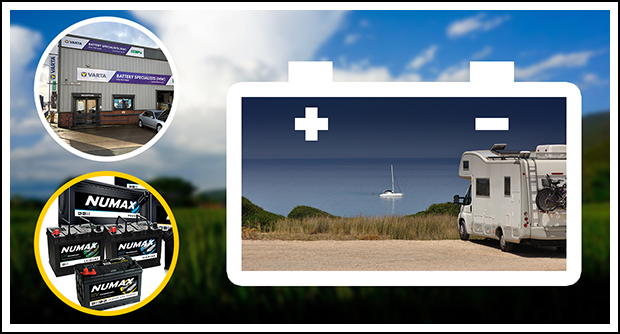 We supply batteries for all budgets so just give us a call on 0151 933 4646 and we will help you get the perfect battery that suits your needs.

We can also deliver your battery generally the next day although we may be able to deliver same day in some cases. This service is available to all Liverpool post codes and some Wirral postcodes. Please give us a call for further information.

We also supply all our Leisure Batteries to trade customers with generous discounts. This service is available throughout the whole of the UK as we can arrange delivery generally the next day or same day for local areas, just give us a call on 0151 933 4646 and we can arrange a credit application.

Leisure Batteries, sometimes referred to as Deep Cycle Batteries and Caravan Batteries, are specially designed in order to administer supply of power in moderation, over a prolonged period of time. Typically put to use in boats and mobile homes in order to provide power to low-input electrical apparatuses such as television sets and lighting, leisure batteries are also used in order to power mobility scooters, golf carts, and other forms of light electric transport.

From a construction perspective, leisure batteries are reasonably similar to batteries found in cars and other vehicles, though tend to have broader active battery plates, as well as thicker, broader separators between plates. This facilitates to reduce the loss of active material when recharging the battery, and during discharge – allowing the battery to be discharged more prominently. Conventional automobile batteries are specifically designed in order to administer a high current over a concise period, meaning they are not ideal for deeper discharges.

The majority of leisure batteries feature an output voltage of 12v, and are available in all manner of capacities and prices. The capacity of leisure batteries is measured in Amp Hours, ranging from 70Ah to 135Ah. A 70Ah battery should, in theory, power an appliance by drawing 1 Amp per 70 hours, although in reality this is rarely the situation.

As Leisure Batteries begin to age, the rated capacity of the battery will reduce by approximately 20%. In order to get the most out of your battery, it is recommended to only discharge it to approximately half of its rated capacity. After multiple charges, you can surmise that the actual amount of power available will be somewhere around 27 to 28Ah. It’s important to remember that the capacity will be established by the intended use of the battery, so it’s wise to make sure you have an idea of the amount of energy the devices you are powering use up in Watts.

The majority of leisure batteries are of the lead acid variety, although variations exist, including valve regulated and flooded types. Inspection of the electrolyte level of flooded batteries is generally required at regular intervals, as well as ensuring the battery is topped up with distilled water. Handling a flooded battery upside-down can result in electrolyte spillage, which can cause injury. In the event of such injury, baking soda or ammonia is recommended to neutralise the electrolyte.

Valve regulated lead acid, or VRLA batteries required no such topping up, and are sealed. They present no danger of spillage of electrolyte when inverted, and the majority of VRLA batteries hold the electrolyte in a fibre-glass mat. Other types mix micro-silica with the electrolyte, in order to create a gel, and these are called Gel Batteries. VRLA batteries are much more suitable for use in enclosed spaces (for example, motor homes). VRLA batteries vent substantially less gas than their flooded counterparts.

It is important not to charge batteries at too high a voltage, as this will almost certainly be damaging, and leads to the boiling and subsequent venting of the electrolyte, resulting in a reduced capacity.